Roulette is game that deserves to be played in venues worthy of its mystique and its reputation for classy, sophisticated action and entertainment. The best land-based casinos that offer the devil’s game are more than worthy, and they offer players incredible experiences in Europe, the US, and Asia.

Some of the venues on our list are intimately associated with the history of the classic game itself. Without further ado, let’s find out more about the finest casinos in which you could bet on the wheel of fortune.

Located in the historic German spa town of Bad Homberg, the Casino Bad Homburg is one of Europe’s grand old gaming destinations. The venue was established by twin brothers François and Louis Blanc in May 1841 when French legislation made it clear that they could not operate casinos in their home country.

In 1843, the brothers introduced a single 0 edition of Roulette, which was one of the most significant moments in the history of the game. Now recognised as one of Germany’s top land-based gaming venues, it offers an array of games such as the French and American variations of Roulette, and it boasts a fine restaurant, and entertainment options. The experience could rival the excitement of political betting in Australia.

Although Monaco’s first casino opened in December 1856, it wasn’t until 1863 that construction of the first phase of what is now known as the Casino de Monte Carlo was completed. Prince Florestan’s son Carlo appointed Albert Aubert and Napoleon Langlois to oversee the project, but the person who was responsible for operating the casino was none other than François Blanc of Casino Bad Homburg fame.

The Casino de Monte Carlo, which is still a playground of the rich and famous, offers French Roulette, one of the most iconic variations of the game. It features a single zero, and offers inside, outside, call, and neighbour bets.

Inspired by the famous Italian city of Venice, the Venetian is one of the most famous gambling venues in Las Vegas, USA. The land-based casino has one of the biggest gaming floors in the world, which means it offers hundreds of table games and more than 2000 slot machines.

There are three different variations of Roulette available, namely the European and American forms, as well as a unique edition called Sands Roulette. The hotel features replicas of the Piazza San Marco, the Rialto Bridge, and the Palazzo Ducale. 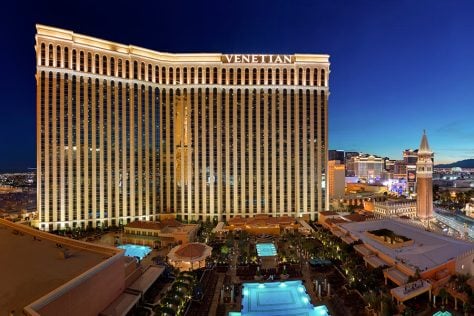 One of the most glamorous casinos in Macau, the City of Dreams needs to be seen to be believed. Cornered by the Crown Towers, Hard Rock, and Grand Hyatt Macau hotels, the venue boasts three floors featuring more than 20 restaurants and bars, more than 200 shops, and a huge casino.

There are more than 1500 slot machines and more than 500 gaming tables, some of which offer different variations of Roulette. However, the most popular game at the venue is Baccarat.